In 1929 the Santa Fe switched from building composite double sheathed box cars to their first single sheathed box cars. These cars were based on the ARA Standard XM-1 single sheathed box car design approved in 1924. These cars differed from the ARA Standard in that they were nearly a foot taller with a 9'6" interior height. A more interesting detail, unique to the Santa Fe cars was the use of threaded tension rods, rather than a steel strap, applied diagonally at the lower corners of the side. Photos show that most of these were removed over time.

In 1930, 3,500 Bx-12 class cars (126000-129499) were built. The major difference of the Bx-12 cars were their Dalman One-Level trucks. There were additional minor differences in the switch from a top-operating to a bottom-operating uncoupling lever, and the placement or attachment of various grab irons, the route cards, and reporting marks on the ends of the car.

In 1931, an additional 1,000 cars were built as the Bx-13 class (135000-135999). The major difference over the Bx-12 class was the use of a peaked Murphy Solid Steel Roof instead of the Radial roof on the earlier cars. This is similar to the familiar Rectangular Panel Roof used in the '30s and '40s minus the rectangular stiffening panels. The door was slightly different as well, being the currently produced iteration of the Youngstown corrugated steel door.

All cars of these classes used the then-standard KC brake system.

From 1941-1944, Santa Fe modified most of the Bx-11 and -12 class cars by increasing their height. In addition, they received AB brake appliances.

Beginning in 1941, they received new Murphy Rectangular Panel Roofs applied on top of steel spacers and a new blank end panel, increasing the interior height of the car by 6" to 10'0" which was the AAR Standard at the time, although a Modified Standard was approved in 1941 for a 10'6" interior height. In 1943, they began installing a new modification using a taller steel spacer on the sides, with hat-section stiffening ribs, and an end panel with an extra corrugation, increasing the interior height of these cars to the 10'6" that had been approved as the optional Modified AAR Standard in 1941. This modification is much more visible, making it possible to identify these cars in photos even at an oblique angle.

In the early '50s, the Bx-13 class would be the first to undergo a more substantial rebuilding. 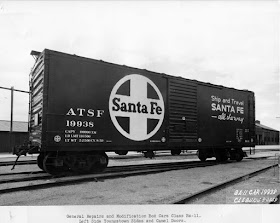 By 1950, less than 25 of the Bx-13 class had been lost, presumably to accidents. But none of this class had received the extended roof modifications of the Bx-11 and -12 classes. This would be rectified by a more substantial rebuilding to the same 10'6" interior height by adding an extra corrugated panel on the end, and by installing new steel sides, for all practical purposes appearing like the many AAR Standard box cars of the era. The usual tell-tale signs of a rebuilt car being the ends and the side sill, and the characteristic notch at the corners due to the slightly narrower ends.