What does it take to make a model? Why so much?

Reminder: We are crowdfunding this project and it is vital that you make your pledge to back our project on our IndieGoGo page by March 9, 2020 or it will not move forward. We were able to extend the funding period once. The IndieGoGo terms allow a maximum 60-day funding period, and we cannot extend it beyond that date.

What does it take to make a model?
Subtitled: Why is this a $250,000 project?
Sub-subtitled: Can you do only one of these cars if you don't raise enough money?

Good questions, so I'll explain how we've chosen to approach this project and why.

As many of you know, injection molded models are produced by cutting molds (dies) out of metal (usually steel, but can be aluminum), and these are used in a machine that injects melted plastic under pressure to fill the molds and make the parts. This is also known as the tooling.

The parts are connected to sprues, which are made by the channels in the tooling to allow the plastic to get to the parts.

There are two basic types of molds, two-part (a top and a bottom) and multi-part. Two-part are less expensive, but a multi-part mold (top, bottom, sides, and ends) allows you to make a one-piece body. Slides let you have removable parts of the multipart mold (whether it's ends, or perhaps just the fan housings on top of a locomotive), so you can have multiple variations of a given model.

A multi-part mold is more expensive, but this is typically offset by lower assembly costs, at least partially.

For this example, I'm assuming a mold will average $5,000, and we'll assume a multi-part mold is $10,000. There are variables, but this will make the math easier.

In a typical box car model, you might have 6 or more molds:

Depending on the company, you may have additional fixed costs for design and CAD work, etc. We'll say $4,000 for the basic design work, plus another $2,000 for 5 paint schemes. There are also fixed costs in regards to decorating (the pad printing designs and pads, or tampos), plus you'll pay for several sample models along the way. So we'll allocate $4,000.

While shipping from China can vary a bit, it's somewhat predictable and we'll allocate $5,000 for that. And you'll want to insure that in case the boat sinks.

Production costs are a fixed price per unit. This includes the materials, assembly, decoration, and packaging. This will vary from project to project, and we'll say $15/unit. In theory, this can be less for a large run, but generally not in the quantities that are produced for model railroading.

In addition, you'll be paying a percentage of the SRP/sales price for credit card fees/IndieGoGo fees, etc. In addition, you'll want a bit of a buffer to cover unforeseen expenses. We'll set these costs as a very conservative 25%.

I tend to work backwards at this point. For example, let's see if we can make this a $30 freight car.

And what's the total cost of the project?

6,000 units is a lot of freight cars. And we have 5 paint schemes and as many variations as we can fit in the molds (more on that in a moment).

This assumes that all of the models are sold at the SRP, which is not the case. We're offering up to a 20% discount for those that pledge early, and dealers get larger discount. So that $50 box car is actually a $40 (or less) box car.

Good question. Here's how we could split up our first project:

The problem with cars like these is that they don't share enough parts. Paradoxically, if we look at them as a much larger project, it looks more viable.

Here's a picture with two different part sprues from other models: 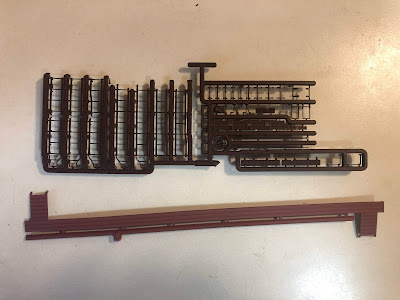 An interesting thing about cutting tooling in China, is that both of these molds would have cost the same amount. It's more about the die size than the number of parts in the die. So one thing that we can do is add more parts. One option is to run multiples of the same part, thus requiring fewer parts to be run. But we looked at another option - add parts that aren't needed for this model.

For example, the project needs the wood running board as shown. But there's plenty of room for additional parts, so lets add some doors that have never been produced. We want to maximize the molds' capacity, although often the specific parts needed for a model aren't a good fit for a specific mold (or might use a different type of plastic, and therefore can't share a mold).

When the factory assembles a model, they start by cutting everything off of the sprues and organizing them in bins. They then follow the instructions for whichever model they are building. Extra parts are boxed in bulk and sent with the finished product. There's no additional tooling cost, we simply pay for the materials cost. That's actually better, though, because they prefer to purchase the plastic by the drum or rail car. So the extra cost, if any, can be minimal.

To do the ATSF Bx-11, -12 and -13 cars requires two different ends and roofs. Two roofs can fit on one sprue, and the ends will fit on another, but it's not maximized yet. So we can fit two more sets of ends, one for the RI car, and one for the 12" raised roof.

But the raised roof version needs a new roof too, which means we need to add another sprue. That leaves half a sprue which can be used for the RI roof.  So that adds another sprue and $5,000 of tooling.

To add the 8" roof variation requires another pair of ends, which also requires a new sprue, but we can add ends for the auto cars as well. Another $5,000 in tooling.

So to do the cars that we think are most likely to sell, the ATSF cars including the two different height raised roofs, also happens to provide enough space for the RI cars. But it drives the tooling up to $40,000. And we need two additional trucks, which are multi-part molds, which drive the fixed costs up more. But we also have a head start on the auto cars.

You get the idea. By maximizing the tooling, we get additional variations for a fraction of the cost of producing them on their own. While one approach would be to do one variation for the first run, and then additional variations on future runs, we would still have to sell 3,000 units split between only one or two variations.

By running them all at once, we can split 6,000 units between 17 variations. Which means we need to average 400-500 units per variation. In addition, with so many variations, we increase the likelihood that modelers will purchase more than one car. So far, our average order is 3 cars.

For us, there aren't any other options. We can't fund a project like this ourselves. For these specific prototypes, splitting up the project seems even less likely to work.

Another manufacturer could decide it's worth running one or more of these prototypes. We'd love it if they do, but we don't think it's likely either.

If we don't reach our funding goal, we'll go back to the drawing board and find another project that we think we can successfully fund for our first project. Once we've done that, we may revisit these prototypes.

But we still think there are a lot of you out there that want to these cars. So let's do it now.