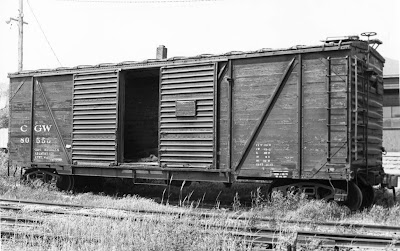 In 1929, CGW built a series of double door auto cars based on the ARA Standard XM-1 single sheathed box car, numbered in the 80400-80978 series (even numbers). Like similar cars, they featured a Pratt truss configuration of steel external bracing with wood sheathing, Dreadnaught ends with three corrugations in each of three panels, radial roofs, and a 12' door opening with Youngstown doors. As with most cars built in this era they used KC Brake appliances with ARA Plate 2 horizontal ("stemwinder") hand brakes.

As with many auto cars of 10'0" interior height, their numbers dwindled relatively quickly after WWII. There were still 138 cars in 1950, plus an additional 19 equipped with Evans loading devices but only 50 remaining in 1955. 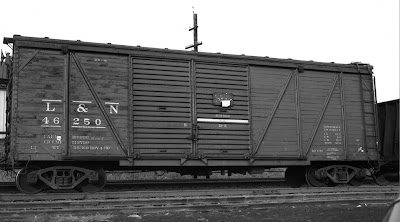 Also in 1929, the L&N built a similar series of single sheathed auto cars numbered 46000-46399. These utilized Dreadnaught ends with 4 corrugations on the top panel, and 5 on the bottom with Murphy Outside Metal roofs. The side sill configuration differed slightly from the CGW cars.

The PM built Auto Cars in 1926 based on the XM-1 design, with 10' door openings and 1 1/2 Camel (wood) doors and 4 rib Hutchins ends. In 1929 they added new cars in the 89350-90349 series that were taller and featured 12' door openings with double Youngstown steel doors. Due to the increased height they had Hutchins ends that featured 4 ribs plus a narrow 5th rib at the top of the ends. They had Hutchins Dry Lading roofs, KC brake appliances, and rode on Dalman Two-Level trucks.

In 1940, the PM rebuilt many of the cars as single door box cars by removing the left door and installing an additional steel diagonal. When the C&O acquired the PM in 1947, there were 99 cars in the original configuration and and 772 in the rebuilt configuration.