I had a great time in Cocoa Beach. Each Prototype Meet has its own feel and character, and this one is a lot of fun. I've been trying to get there for years, and next year we'll make sure John can make it too.

"What about the launch," you ask?

I think it went really well. The response was quite positive, and as I expected there were some great question and ideas for the project. Many of these are things that we should be able to include.


But Sales are Slow

We have had enough visitors to the site in the first week to fully fund the project already, even if the only option selected was $47, but very few are choosing to participate. But why?

Here's some thoughts as to why:

That's fair, as we have no way of displaying our models yet. But stupid me didn't think of putting up examples of the work that this factory has produced in the past. Until I was trying to sell an extra model I had a Cocoa Beach.

This project was injection molded, with lots of etched parts as well. 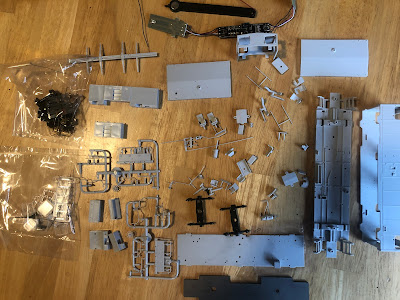 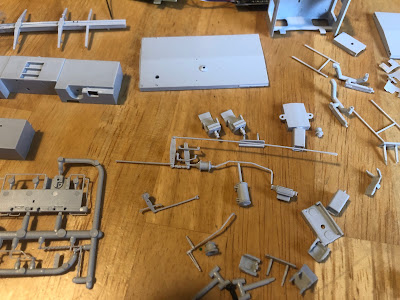 The factory we are using cut the tooling, and produced these as RTR models and undec kits as well. The box and auto cars won't be this complex, but the quality of the tooling will be the same.

2. A new approach with potential risk

We've addressed this already, but I think it bears repeating. This is a new approach, but one that has been used successfully in many industries and hobbies. The biggest risks fort the Backers in a manufacturing project like this are:

Lack of expertise in the Project owner
Raising insufficient funds

As you can see, we've been involved in creating complex injection-molded models in the past. In addition, we are using a factory that we have worked with before, to ensure that the process is as predictable and routine as possible.

Lack of cash flow is among the biggest reasons why projects like this fail, crowd funded or not. We know what it will cost to produce this, and will not move forward unless we raise the full funding required to produce the project. Not just to cover the cost of tooling, but to cover the actual production, packaging, shipping from China, credit card processing fees, etc.

Remember, we aren't drawing a paycheck during this process, and won't realize any profit until after the models are delivered to you.

3. Can you make only one of the variations if you don't reach your funding?

The car that we felt will be the best seller is the 12" raised roof version of the Bx-12. The difference between that and the as-built version of the cars is a new roof and ends. Because we can tool 4-5 pair of ends on a single sprue, doing that one car or the delivery of the Bx-11, -12, and -13 cars, plus the RI car is roughly the same amount of tooling, and the same cost. It goes up incrementally since it now requires 3 different trucks, rather than one, but that accounts for a very small amount of the total cost of tooling. There are additional costs such as packaging, painting and lettering, shipping from China, samples, credit card processing, and other fees, etc. As the cost of the project increases, the number of units required does too.

So we have a prototype that probably won't sell 4,000 units, what are our options? By putting a little more into additional tooling, we can add two distinctly different options - the steel-side rebuilds and auto cars. This increases the funding required by only 25%, but we think it greatly increases the possibility of success. Modelers from 1929 to the '60s can reasonably be expected to want at least two cars from this project. With the major variations/road names we need less than 500 units on average per prototype to make this work. That looks much, much better.

Another consideration is that not all of those pledging want the same models.

We considered a common approach with what are called "Stretch Goals," where we start with one model at a lower funding goal, then add additional prototypes if we reach additional funding goals. We felt this was a poor choice for model railroading, because many modelers might be pledging because they want one of the Stretch Goals, and it's possible that that model wouldn't be produced in the end.

No, we felt it was more honest and a better approach to simply require that we fund for all of the prototypes we're offering up front, so you know that as long as we fund the project we will be making the car you want.

4. Somebody else will do it, and I won't have to help fund it

Of course that's possible too. But the numbers I provided above are in the ballpark of every project I've been involved in over the last decade or so. Somebody with in-house expertise for cutting their own tooling, etc.,  rather than at the factory may be able to reduce the cost. But those companies also have their staff to pay for and other expenses we don't. In particular the need for each project to help fund the next project. We are selecting "niche" products precisely because we think these models are very unlikely to be produced using the traditional approach. Because the risk is too high for the manufacturer. So we think it is unlikely that anybody else will produce these models in plastic.

For many of you, that's true. Although I've been blogging about my modeling for over a decade (http://newbritainstation.com), and if you ask on the Steam Era Freight Car lists, and others, there are certainly a lot of well-known modelers that know at least one of us, and in many cases have been friends for years.

But that's also one of the reasons we are requiring a fully funded project. With some crowd funding approaches, only some of the funding is raised, and the Creators expect to fund the rest. That seems very risky to us, and we want to make sure that we all know whether this project is a go or not. Either we choose, as a community, to make this models happen, or we don't.

If you have any questions at all, please contact us. Even if it's just to tell us why you won't participate.

While it looks like we're a long way away today, the reality is that we don't need that many more people to join us. We've had enough visitors to the site to fund this project several times over. We know that it's a small segment of the market that is going to help fund this. But we're also confident there are enough of you to do so.

We've selected a group of prototypes that nearly ever modeler for the 1929-1960s could use at least two, and probably more.

We will be at Springfield at the Better Living Center, 25-G. Come see us in person and we'll answer all your questions.

One of the things we can't tell is whether people are holding off to see if others pledge. This sort of thing is a bit of a self-fulfilling prophecy. If a lot of people pledge, and pledge early, then others join too. If they don't, then others don't.

IndieGoGo holds the money and we don't have access unless we fully fund. So there is really no reason to wait to pledge. If you want the cars, then pledge early, and spread the word. We know people are interested in the cars, but they need to see that others are too.

Join our community of Backers today and let's make some models - together.